This weekend, Zach Latta & I built the first RedwoodJS app in production: Predict COVID-19. It’s an interactive visualization of the global COVID-19 pandemic, allowing you to see the case trajectories of each country. The main takeaway: the U.S. outbreak is 10 days behind Italy, & tracking it exactly. (see pink line vs green below) 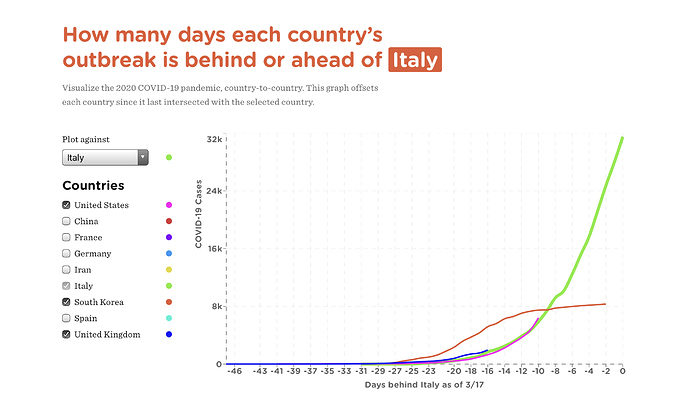 We used 3 cells for the homepage, which dictated the general technical structure of the frontend.

Shoutout to the entire Redwood team for their incredible assistance in deploying the project, including setting up the database <3

Redwood had some on-ramp for sure, mostly since I wasn’t previously familiar with GraphQL, but I got the hang of things pretty quickly. Deployment was the main pain point—I set up a Heroku Postgres database, but we weren’t sure if it could handle the traffic, so we switched it to Amazon RDS, & that was rough for sure. We used Netlify for the site since Redwood has built-in support/setup & Netlify gave us an unlimited plan (including Analytics) since it’s a COVID project.

I 100% see Redwood becoming way bigger. I’m going to continue to use Next.js for the majority of my projects, especially since I’m not making “apps,” but whenever I need to store data, I’d use Redwood again. Its idea of cells is a great new conception, the fullstack integration is great, they help with a lot of things like forms & database queries & have CLI generators throughout the experience. It has 2 main weak points, I think:

Server rendering they’re clearly thinking about, & considering Tom is an investor in Netlify, I wouldn’t be shocked if deployment becomes much more streamlined. Redwood won’t replace Next, but I think it makes building entire classes of applications enormously more accessible in a truly exciting way. It’s incredibly early on right now & a ton of things need a ton more work, but they’ve got several full-time developers working on it every day so I expect quick iteration.